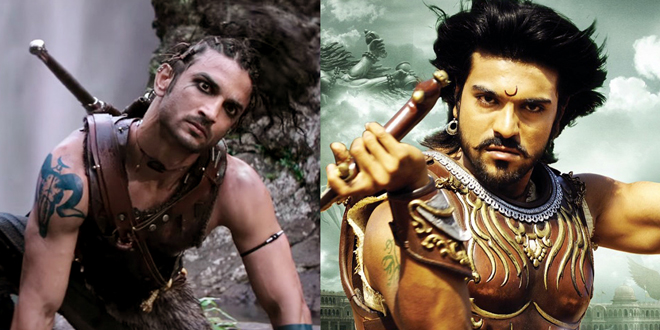 A controversy is brewing in Bollywood over Telugu film Magadheera. The SS Rajamouli directorial with reincarnation as major theme is now allegedly “copied” by an upcoming film Raabta featuring Sushant Singh Rajput and Kriti Sanon.

Hindi producer Madhu Mantena, who owns the Hindi remake rights of Magadheera, is shocked with the close similarities of Raabta. And many pointed that Raabta trailer has resemblances with Magadheera. Raabta, like Magadheera, is a reincarnation drama with two lovers meeting across time. But writers of Raabta say there’s more to it and say the film will have the concept of Karma. The concept is simple: whatever you do has consequences.

Although the writers of Raabta have already clarified and denied that the film is “copy” of Magadheera, and even stated that the comparisons are “untenable”, Madhu Mantena has moved  Hyderabad City Civil Court seeking an injunction against the release of Raabta which is scheduled for June 9 release world-wide. Taking up the petition, the City Civil Court in Hyderabad issued notice to the makers of Raabta and posted the matter to June 1st to release on whether to permit the release of Raabta on June 9 or not. Madhu Mantena contended that the Raabta film has copied its “unique story and plot line” in violation of its copyright. The matter is in the court now. More details would emerge on June 1st.

Share
Previous Tapsee is back with Anando Brahma!!
Next Nagarjuna joins Mohanlal