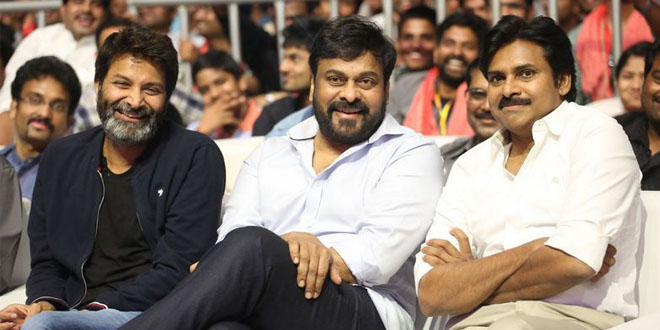 Much needed confirmation on Chiru-PK-Trivikram multi-starrer

Noted politician and film patron T Subbarami Reddy had some time ago created a flutter in Tollywood by announcing to make a film in the Mega combination of Chiranjeevi and Pawan Kalyan. With no seeming progress on the project and the two Mega actors busy with their respective commitments, it was assumed that the proposed multistarrer might have been shelved. Well, it is not.

Subbarami Reddy, who has recently met Pawan and Trivikram on the sets of #PSPK25, has divulged that both Pawan and Chiranjeevi are very excited to act in his proposed multistarrer. ‘Presently, they are busy with their respective films but the story of their multistarrer is being readied. Trivikram will direct the duo once the they are available. I will make the film on a grand scale,’ Reddy said.

Even after the fresh confirmation, the materialization of this project still looks doubtful. Given that Megastar’s next is Uyyalawada, a historical film being planned on large canvas, he may be free only in the second half of 2018. Pawan will most probably get busy with politics by that time.

Mega fans however are keeping their fingers crossed for the happening of this biggest Mega family multistarrer.

Share
Previous ‘Mahanati’ begins..!!
Next Special dates of Spyder out..!!