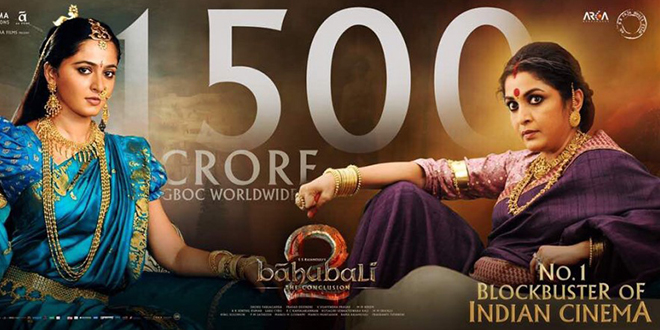 Baahubali 2 – THE JEWEL OF INDIAN CINEMA

A proud moment for Telugu film industry and Telugu people as the most prestigious movie, Baahubali 2: The Conclusion crosses 1500 cr. mark. SS Rajamouli’s magnum opus ‘ Baahubali 2: The Conclusion ‘ has been creating waves at the box-office since its April 28 release. The film starring Prabhas and Rana Daggubati in lead roles has crossed the 1500-crore mark by collecting an estimated Rs 1530 crore at the worldwide box-office, according to a report.

The film grossed around Rs 1253 crore at the domestic box-office and garnered as much as Rs 277 crore from the overseas market (cumulative figures of all languages). The film enjoyed a grand release in about 9000 screens worldwide. Buzz is that the makers are also allegedly planning to release the film in Chinese and Japanese. If the plan does fall through, then there will be just no stopping the Rajamouli flick from powering on to the 2000-crore club.