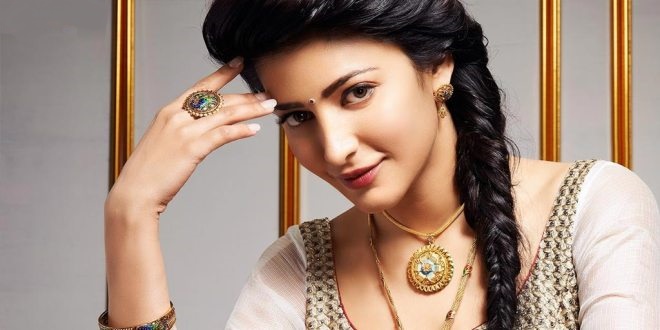 Shruti Haasan is an Indian Film Actress and Singer who works predominantly in Telugu, Tamil and Hindi language films.

Haasan was born to actors Kamal Haasan and Sarika Thakur in Chennai. Her father is an Iyengar while her mother Sarika was born to a Maharashtrian father and Rajput mother. Her younger sister Akshara Haasan represents India nationally for Ballroom Latin dancing. Haasan studied at Abacus Montessori School in Chennai and moved to Mumbai to study psychology at St. Andrew’s College.

Haasan focused on cinema and music, and eventually traveled to the USA to continue to learn music at the Musicians Institute in California, before returning to Chennai.Through her successful career, she has received three Filmfare Awards and has established herself as one of the leading actresses of South Indian cinema.[4]

As a child artist, she sang in films and appeared in a guest role in her father’s ‘Hey Ram’ (2000), before making her adult acting debut in the unsuccessful 2009 Bollywood film , the drama thriller film ‘Luck’. She later went on to win critical acclaim for her role in the Walt Disney fantasy film in Telugu, ‘Anaganaga O Dheerudu’ (2011), ‘Oh My Friend’ (2011) and her Tamil debut ‘7aum Arivu’ (2011). After several successful films like ‘Gabbar Singh’ (2012), ‘Race Gurram’ (2014), ‘Vedalam’ (2015) ‘Srimanthudu’ (2015), and ‘Singam 3’ (2017) , she established herself as one of the leading contemporary actress in Tamil and Telugu cinema. In a recent poll conducted by the Chennai Times, Haasan topped the list of most desirable women. Alongside appearing in Tamil and Telugu films, she has also appeared in several commercially successful Hindi films, including ‘Ramaiya Vastavaiya’ (2013) and ‘Gabbar Is Back’ (2015).

In addition to acting, Haasan has also continued her stint in music through work as a singer in Indian languages and has become an established playback singer in India. For her songs, she has received Filmfare Award for Best Female Playback Singer – Tamil and the Filmfare Award for Best Female Playback Singer – Telugu nominations for the songs “Kannazhaga Kaalazhaga” from the film 3 (2012), “Yeandi Yeandi” from the film Puli (2015) and “Junction Lo” from the film Aagadu (2014). She began her career as a music director with her father’s production ‘Unnaipol Oruvan’ and her own music band and album.