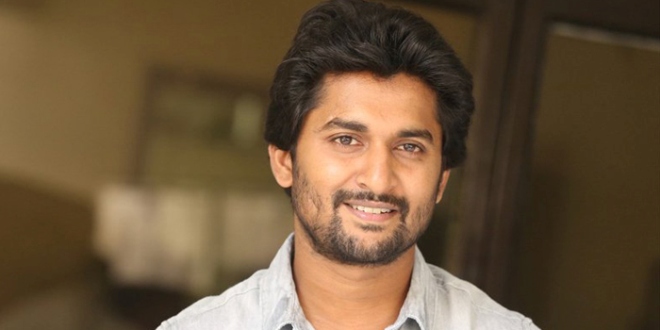 Naveen Babu Ghanta, better known by his nickname Nani, is an Indian Actor who stars in Telugu films and a few Tamil films.

Nani was brought up in Hyderabad, India. He did his schooling from St. Alphonsa’s High School and then studied in Narayana Junior College, S.R Nagar before graduating from Wesley’s. After his education, he became an assistant director and worked with Srinu Vaitla and Bapu, before working as an RJ for World Space Satellite in Hyderabad.

During his graduation, Nani “got addicted” to movies, citing Mani Ratnam as a big influence on him. He wanted to become a director; thanks to producer Anil, who was a distant relative of his, Nani could join director Bapu as a “clap director” for the film ‘Radha Gopalam’ that Anil was producing at that time. He then worked for films including ‘Allari Bullodu’, ‘Dhee’ and ‘Astram’. Nani took a sabbatical to work on a film script. Nandini Reddy, a friend who was then working as a radio jockey for World Space Satellite, offered Nani work as an RJ. He accepted and worked for one year, hosting a program named “Non-Stop Nani”. He was offered the film ‘Ashta Chamma’, also starring Swati Reddy, when the film’s director Mohan Krishna Indraganti noticed him in an advertisement. Ashta Chamma was well received by critics and Nani’s performance was praised by them.

His second film, ‘Ride’, was produced by Bellamkonda Suresh in which Tanish, Swetha Basu Prasad and Aksha Pardasany played important roles. Ride was also a notable success at the Box office. He next starred in Satyam Bellamkonda’s film ‘Snehituda…’ opposite Maadhavi Latha. Snehituda opened to negative reviews and the film was a flop at the Box office. In 2010, he played the main role in the film ‘Bheemili Kabaddi Jattu’, a remake of ‘Vennila Kabadi Kuzhu’, with Saranya Mohan reprising her role as the heroine. The film opened to positive reviews with Nani’s performance receiving appreciation.

His first release in 2011, ‘Ala Modalaindi’, was a romantic comedy written and directed by Nandini Reddy. Nithya Menen was the female lead of the film and it was her debut in Telugu. It was told that many of the scenes in the film were inspired from the life of Nani and Nandini Reddy. Nani’s performance in the film received positive reviews, with critics noting that he was “completely natural” and “living [his] role”. The film was a Blockbuster at the Box office.

Simultaneously he did a Tamil film, ‘Veppam’, with his friend Anjana as director which marked his Debut in Tamil cinema. Veppam received mixed reviews but Nani and Bindu Madhavi were appreciated.It was dubbed into Telugu as ‘Sega’. Both the versions were flops at the respective Box offices.Later in 2011, Nani had his last release in ‘Pilla Zamindar’, in which he and Srinivas Avasarala were once again seen together after Ashta Chemma. ‘Pilla Zamindar’ opened to mostly positive reviews from critics and Nani’s performance as a spoilt-brat-turned-leader was well appreciated.

Nani’s next release was S. S. Rajamouli’s live action project ‘Eega’. Shot Simultaneously into Tamil as ‘Naan Ee’, it featured Nani, Samantha Ruth Prabhu and Kannada Superstar Sudeep in main roles. Eega received unusual positive response with Nani’s act being praised.The film was a Blockbuster at the Box office and was dubbed into Hindi as Makkhi and into Malayalam as Eecha.

His last release of 2012 was Gautham Menon’s ‘Yeto Vellipoyindhi Manasu’ opposite Samantha Ruth Prabhu. It was the simultaneously shot Telugu version of the Tamil film ‘Neethane En Ponvasantham’ which featured Jiiva in the place of Nani. Nani made a guest appearance in the Tamil version too. His portrayal of Varun Krishna was highly appreciated by critics.

Nani turned producer for the film D for Dopidi, which was co-produced by Raj Nidimoru and Krishna D.K. and starred Sundeep Kishan and Varun Sandesh. He also lent his voice to the film. The film was a flop at the box office.

In 2014, Nani was first seen in Krishna Vamsi’s ‘Paisa’. The film revolved around the power of money and its influence over everything in society. Nani played the role of Prakash, a Sherwani model who is obsessed with gaining money. He next starred in Yash Raj Films’ maiden south Indian production ‘Aaha Kalyanam’, the Tamil remake of the 2010 Hindi film Band Baaja Baaraat (also produced by Yash Raj Films). It was partly shot simultaneously in Telugu under the same title. The film received mixed reviews but Nani’s performance as Shakti was well received.

Nani played a dual role for the first time in the film ‘Janda Pai Kapiraju’, co-starring Amala Paul. The film was simultaneously made in Tamil as Nimirndhu Nil with Jayam Ravi in Nani’s role. Nani’s Bhale Bhale Magadivoy hit the screens directed by Maruthi Dasari and produced by geetha arts in association with UV creations the movie received positive responses from critics, The film was a BlockBuster at the box office and went onto to become the fourth-highest grossing Telugu film of all time at the United States box office.

In 2016, his first movie was ‘Krishna Gaadi Veera Prema Gaadha’ a Telugu romantic comedy film written and directed by Hanu Raghavapudi and produced under the banner of 14 Reels Entertainment saw newcomer Mehreen Pirzada as the female lead.The film opened with positive response from critics,Thus,became Nani’s biggest opener in India, beating the records of his last film ‘Bhale Bhale Magadivoy’.

then he made films like ‘Gentleman’, ‘Jo Achyutananda’, ‘Majnu’, ‘Nenu Local’, ‘Ninnu Kori’.