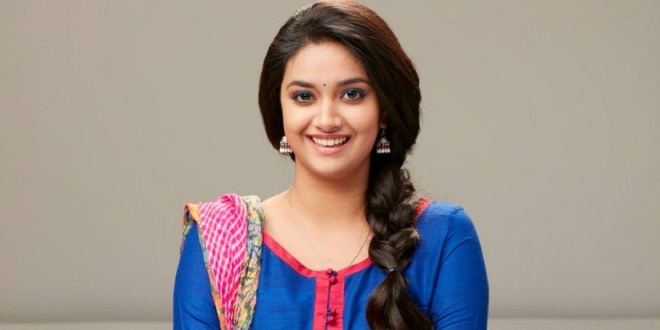 Keerthy Suresh is an Indian Film Actress who appears in Tamil, Malayalam and Telugu films.

She is the daughter of Malayalam producer Suresh Kumar and Malayalam actress Menaka. Keerthy made her debut as a child actress in the early 2000s and, after graduating in fashion design, she returned to do lead roles. She played her first lead role in the 2013 Malayalam film ‘Geethaanjali’ and has signed up films in Tamil and Telugu films as well. her elder sister, Revathy Suresh, who works as a VFX specialist and had previously worked for Shahrukh Khan’s production house Red Chillies. Until class four, Keerthy did her schooling in Chennai, Tamil Nadu. She then studied in Kendriya Vidyalaya, Pattom, Thiruvananthapuram before coming back to Chennai to join the Pearl Academy where she completed her degree in fashion design. She also spent time on an exchange program in Scotland for four months, before completing a two-month internship in London. Despite making a career in acting, she has stated that she was also “seriously considering a career in designing”.

In the early 2000s, Keerthy worked as a child actress in a few of her father’s productions such as ‘Pilots’ (2000), ‘Achaneyanenikkishtam’ (2001) and ‘Kuberan’ (2002) and some television serials. 11 years after ‘Kuberan’ she made her debut as a lead actress in Priyadarshan’s horror comedy ‘Geethaanjali’, in which she had a dual role. She was still studying during that time and shot for Geethaanjali during her semester break. Keerthy had her next release, ‘Ring Master’ directed by Rafi of Rafi Mecartin duo in which she shared screen space with Dileep. She played the role of a blind girl, which she said was much more challenging than her double role in Geethanjali. The film was a commercial success.

In 2014, Keerthy accepted her first projects outside of Malayalam and signed on to appear in several Tamil film projects simultaneously. Her first film release was A. L. Vijay’s romantic comedy ‘Idhu Enna Maayam’ (2015) opposite Vikram Prabhu, though the film did not perform well at the box office. Her busy schedule throughout 2015 meant that she had to opt out of films which she had already started working on, including Krishna’s ‘Maane Thaene Paeye’ and Deekay’s ‘Kavalai Vendam’, in order to accommodate bigger projects.She consequently worked on two films with Sivakarthikeyan in quick succession, ‘Rajini Murugan’ and ‘Remo’, while also playing the lead role in Prabhu Solomon’s ‘Thodari’ alongside Dhanush. That year, she also signed up her first Telugu film, ‘Aina Ishtam Nuvvu’ directed by Ramprasad Ragutu. The film, supposedly an adaptation of ‘Rendu Jella Sita’ (which was also Aina Ishtam Nuvvu’s initial title), was termed “a sweet love story on the lines of the Ramayana” by Keerthy, who would be playing Janaki, a “bubbly playful character” similar to Sita. In January 2017, Keerthy appeared in ‘Bairavaa’, opposite actor Vijay and directed by Bharathan..

As of 2014, Keerthy has completed shooting for the art film ‘Darboni’ in which she would be seen as a Kashmiri girl. Besides she is part of ‘Paambhu Sattai’ in Tamil, in which she plays a poor Chennai girl from a lower middle class strata, and ‘Nenu Sailaja’ in Telugu. She has also signed up a film with Suriya titled ‘Thaana Serndha Kootam’, directed by Vignesh Shivan.

she is working on Pawan Kalyan’s next film to be directed by Trivikram Srinivas. and Nag Ashwin’s Mahanati.