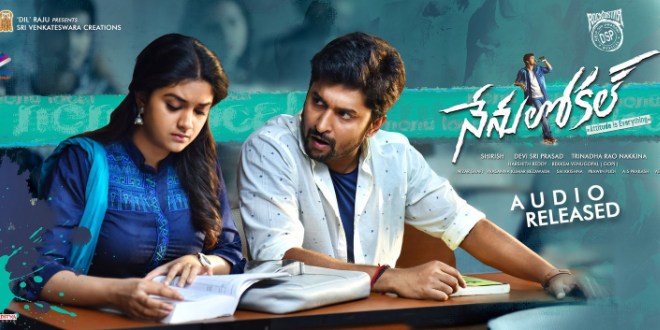 Nenu Local is the most Awaited Action Drama Romantic movie in Tollywood starring Nani and Keerthy Suresh in the lead roles. In the film, we can see Nani as Babu, Keerthy Suresh as Keethy, Naveen Chandra as Siddhartha varma, Rao Ramesh in a brief negative role. Sachin Khedekar, Posani Krishna Murali and Easwari Rao in the other supporting roles.This is the love story flick like any other tollywood movie which was directed by ‘cinema chupista mama’ fame Trinadha Rao Nakkina and produced by Dil Raju under his SVC banner.

The film is totally around Romantic love Story. Nani has been projected in a completely different way, his mass acts will sure impress the youth big time and connect to them well. some of the sceenes look heavily inspired from nani’s previous film bale bale magadivoy, this was a diffrent approach. the first half passes with how the love story developed and litle comedy.

The second half of Nenu Local starts with energy and the audience will be surprised with the twist that has been revealed post interval. The best thing is that the movie picks up at jet speed inspite of slow narration. The pre-climax and the climax episodes are an asset for the movie.

The movie is simply entertaining and Keerthy Suresh’s innocent acting worked for this movie. Keerthy-Nani pair looks pretty good on screen. Nani like any graduate guy looks good and acting in the emotional sceenes and comic timing were great. Keerthy Suresh had done good and she had regular dialogue unlike her previous telugu movies.

Musically Nenu Local is already a hit with Devi Sri Prasad’s tunes. Out of all songs, the first one “Next Enti,” the situational song placed well and also choreographed decently. Ace producer Dil Raju, who recently scored superhit with “Shatamanam Bhavathi” scored another hit with this film.

Despite the routine plot, Nani’s performance, DSP’s music and entertainment factor makes it a decent watch.it is light and any audience will enjoy watching it.