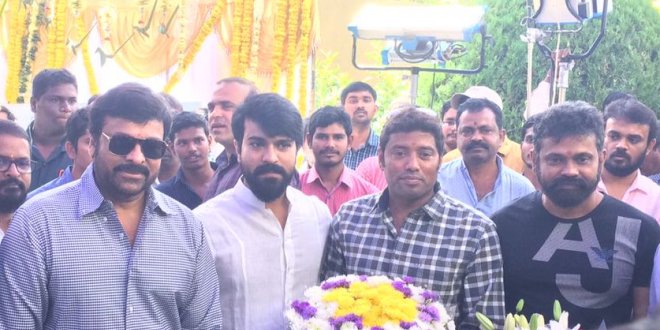 Mega Power Star Ram Charan’s next in the direction of Creative Director Sukumar was launched this Morning in Hyderabad. Living up to his name, Sukumar released a ‘Shoot Begins’ poster of the film which has positive vibes written all over it. The poster is more of a drawing but has shown the essence of the film. Ram Charan is seen carrying a Kavidi. He is seen clad in a Lungi which is seen on the village side. The Poster gives an impression that the movie is going to be a perfect makeover for Ram Charan. The background gives an impression that the movie is said to be a village based love story. Samantha is going to romance Ram Charan for the first time in this film. The regular shooting of the film will begin in the first week of February. Devi Sri Prasad, the usual music composer of Sukumar is once again scoring music for this film as well.

Super talented director Sukumar is known for his tricky narration along with some surprising and unique narration. Along with these his actors undergo stupendous transformation and 1-Nenokkadine, Nannaku Prematho are the examples.Charan is impressed with the script and his new look is said to be one of the film’s major highlight.