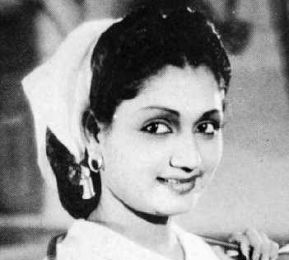 G. Varalakshmi, born Garikapati Varalaxmi 13 September 1926 – 26 November 2006, was a veteran Telugu and Tamil actress, stage artist, singer and director. She is well remembered for her arrogant roles in movies like Drohi and Letha Manasulu.

Varalakshmi was born in 1926 in Ongole, Andhra Pradesh, India. She left home to act on stage in Vijayawada, when she was 11 years old. She acted along with drama artists Thungala Chalapathi and Dasari Kotiratnam and became popular for her roles in plays like Sakkubai and Rangoon Rowdy.

Her first movies are Barrister Parvatheesam, produced by Raghupathy Prakash, and Bondam Pelli, produced by H. M. Reddy, when she was 14 years old. These two movies were released together as a two-in-one movie. She moved to Bombay to sing in chorus groups for Naushad in 1942. As her career as a singer was not successful, she returned to Madras in 1946. She married filmmaker and studio-owner K. S. Prakash Rao. Her husband and she acted in and produced a controversial and popular movie, Drohi. She played an arrogant daughter role in that movie.

She later acted in popular movies like Kula Gotralu, Kanna Talli and Pelli Chesi Choodu. She acted with all the top heroes in the 1940s and 1950s in Telugu and Tamil. She played roles of both the loving woman and arrogant sister or mother-in-law. She also directed a social movie, Moogajeevulu. She joined politics and supported M.G.R for a short time. She was an active member in Andhra Pradesh Praja Natya Mandali.